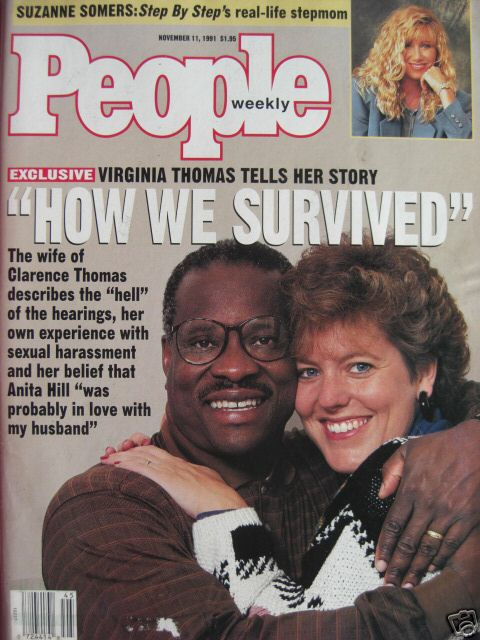 'Justice Clarence Thomas grew up in the 1950's. Due to having dark skin color [under White Supremacy], he was ridiculed by friends as 'A.B.C.' an acronym meaning America's Blackest Child. Both black and white children in his Southern Georgia town referred to him by such a name.'
- An Historical Analysis of Skin Color Discrimination
By Dr. Ronald E. Hall

The System of White Supremacy produces monsters and monstrosities. White people are dedicated to nourishing mental psychosis amongst black people. A primary Racist mandate is to make black people believe that our abuse is justified and White-Jesus-sanctioned because of our high melanin content and phenotypical features. If we were a bit more pale, if our hair were less wooly... we would not be mistreated by White people. White people overstand that:

... because of this deeply entrenched self-hatred the liberation of [black people] is not eminent because in order for a people to attain liberation they must first feel worthy of such liberation.  Omowale Akintunde

Trojan Horse Press has released their fourth publication to expose the sophisticated Racist agenda to abolish black self esteem. THE BEAUTY CON GAME deconstructs the ceaseless offensives targeting black females and black males. The authors provide evidence and counter-racist logic to explain that once black people are convinced of our own inferiority, it's only natural to accept Racist Woman and Racist Man as superior and to do all we can to emulate, become them.

Since the genesis of White Terrorism, the obliteration of black self-respect has remained a principal objective. THE BEAUTY CON GAME labels this Racist enterprise The Black Inferiority Complex.  White people allocate massive resources to producing infinite amounts of...

THE BEAUTY CON GAME  clarifies that the White Supremacist economy values/demands black deprecation. Humiliation of black people is such a lucrative business that even black people have been given large sums of money to humiliate black people. Don Imus, Howard Stern, Rush Limbaugh and a litany of White talk show hosts command gargantuan salaries and listening audiences that constantly demean any and all black people.

Black people will not defeat White Supremacy as long as we crave White features, White people. A failure to accurately recognize the ubiquitous allegations of black deficiency as White Supremacy Programing, will nurture a deep rooted loathing of black people. A deep rooted reverence, worship of White people. White Identification. Victims suffering from this Racist affliction will do much to distance themselves from black people and/or behaviors associated with black people. The Black Inferiority Complex is one of the greatest impediments to black people having healthier relationships with one another.

As opposed to acknowledging, opposing White people's undying, eternal commitment to the molestation of black people, White Identified Victims often seek validation and acceptance from our very oppressors. This behavior is the product of White Supremacist design. It's a major reason why we have yet to solve this problem.

THE BEAUTY CON GAME insists that black people respect and value ourselves. The authors discourage all attempts to prove black intelligence or black beauty to White people. We should not feel the least bit of despair or angst when Whites praise The Bell Curve or ridicule the contributions of black people as insignificant or non-existent. We should train ourselves to expect crude, false,  trifling words and deeds from Racist Man, Racist Woman, Racist Child. We dramatically reduce the potency of Racist speech when we fail to respond emotionally/"chimp out" to White antics.

If black people were the sexually repulsive buffoons White people claim, we would not have the term mulatto, been subjected to Monster's Ball, or the Jerry Sandusky scandal. Bottom line... White people have demonstrated a craving for the rape of black males, black females and/or black children. The authors posit that Racists humiliate black people to erode our self esteem AND self defense. To make us easier prey.

It's not about hating White people. And it's not about seeking validation or acceptance from Racists. It's about black people affirming and accepting ourselves. It's about every single black person making a commitment to black self respect, black beauty, and black intelligence. An obligation to uphold and appreciate the worth of all black people. THE BEAUTY CON GAME is about placing black self-hate and White Identification in the same category as smallpox. Devastating, lethal viruses that took hundreds of thousands of lives, but were eventually eradicated. Trojan Horse Press is a major contribution to the cure.

After using the word denigrate for years, I came across information about the origins of the word. It literally means "to blacken", and since it is used to refer to negativity, I think it is one of those words, like "fair", that should be eliminated from our vocabulary.

I hate to say it.
but honestly....I feel like white people have been jealous of black people for 100s of years.

all this constant abuse...is coming from some type of weird source.